LITERARY FESTIVALS: GETTING OUT AND ABOUT AMONG MY FELLOW LATINA/O AUTHORS!
October has been a literary feast for me and for many of my friends and colleagues who also happen to be authors. Here's the lineup of places I've been this month, plus some writers with whom I had the pleasure of appearing and who were great to talk to:
OCTOBER 2:  DUARTE (CA) FESTIVAL OF AUTHORS
Set in a beautiful senior residential complex, we were among tall pine trees, winding paths, and green patches of grass that define the parklike boundaries of the complex. Approximately 75 authors participated, but only about 7 are Hispanic. Two of us--my son, Victor Cass, and I--spoke on a panel. Our topic was "Mystery and Fiction."
The following Latinos were participants in this well-regarded festival:

I'm the seventh Latino author at the Duarte Festival. My book, The Heavens Weep for Us and Other Stories (Outskirts Press, 2009), has been positively reviewed by various Latina/o authors. It is a compilation of 12 short stories set  mostly in Texas, California, and Chicago. You can learn more about it on my author website at http://www.thelmareyna.com/, which includes its title story in its entirety, as well as samples of my other publications.
﻿﻿
﻿﻿﻿﻿﻿

﻿﻿﻿﻿﻿﻿﻿﻿                                   LOS ANGELES LATINO BOOK & FAMILY FESTIVAL
﻿﻿﻿﻿ On the weekend of October 9 & 10, the campus of California State University, Los Angeles, became the stage for the largest gathering of Latina/o published authors in the history of the United States. Over 120 authors from all over America came together to serve on panel discussions, solo presentations, and booth displays of their books. Previously described on this site, the festival was a huge success with strongly established pioneer Hispanic authors, emerging writers, and everyone in between sharing their collective experiences and creativity with thousands of attendees that represented the spectrum of multicultural, multigenerational America. There were readings, signings, and Q&A's galore! Indeed, this was the literary feast of the year.

﻿﻿ Here are some photos of participating authors: 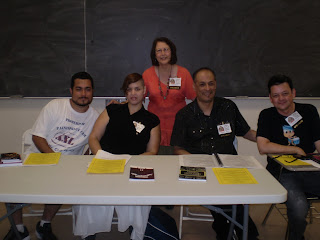 I served as moderator on a panel with the following
engaging authors, from l-r:
David Bueno-Hill, Vanessa Libertad Garcia,
Manny Pacheco, & Ed Rodriguez ﻿﻿
﻿﻿

﻿﻿﻿﻿﻿
One of the highlights of this year's Latino Books & Family Festival was the presentation of the First Annual "Latino Books into Movies Awards," an exciting new venture. Two or three books were chosen in several different movie categories (Action & Adventure; Animation; Comedy; Documentary; Drama; Kids & Family; Romantic Comedy; and Suspense & Mystery). Professionals in the entertainment industry served as judges and selected winners and runners-up. Click here to read all about it: http://www.box.net/shared/avl3g1fhpx#/shared/avl3g1fhpx/1/53508294/522850838/1
Congratulations to these authors whose works we may someday see on the "big screen."

﻿﻿ ﻿﻿﻿﻿﻿﻿﻿﻿﻿﻿﻿﻿﻿All in all, these two author festivals gave our Southern California community ample exposure to some of the greatest literary talents in Latino literature today. I was humbled and honored to have been included in their company and came away inspired and motivated to learn more about my colleagues.﻿﻿ Kudos to author Reyna Grande and to Cal State LA Professor Roberto Cantu, Ph.D., for their leadership in organizing and staging the Latino Book & Family Festival, with the collaboration and support of their outstanding team of volunteers, including Latino Literacy leader, Jim Sullivan.